2016 GIRLS STATE – A program of the American Legion Auxiliary

Girls State is a week-long program of Americanism, patriotism, civics and government for Wyoming girls finishing their junior year of high school.  2016 marked my tenth year of volunteering to staff this terrific program.  After County Fair, Girls State is my favorite week of the year!

I have met the future leaders of this state and this country in these young women.  They write and debate bills, run for office (city, county, state, federal and judicial), try court cases, participate in party (Nationalists and Federalists) activities, run primary and general elections, prepare flag ceremonies and much more.

In 2016, my job involved supervision of the Girls State House of Representatives and party/election activities.  Watching these girls debating bills and developing party platforms is heartwarming.

The girls learn the importance of every vote – that every vote counts.  This year we had a tie in the race for state supreme court justice, which we broke by drawing ping pong balls out of a cowboy hat.  In 1994, there was a tie in Wyoming House District 21, and the governor did the same thing (and, it was broadcast on national TV!) and a tradition was born.

Every year, we graduate girls who are fully prepared to participate in their parties, their government and their communities.  Learn more:  http://www.wyamericanlegionauxiliary.org/girls-state 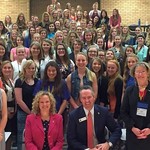 Click on the links
to go to their web sites: